Innovating for
half a century

It took Carlos Castro over a month to make his first float. An entire month to understand how a machine that had been delivered without any instructions worked. An entire month to invest all his knowledge of chemistry into obtaining an ideal mix of plastics. One month, one float.

Manufacturing floats was not Carlos’ profession. However, one day it would be and he would end up being a market leader but, at the time, in the early 1970s, the story had only just begun. The fragility of the aluminium and glass floats used at the time and the fact that they did not last long at all was a constant source of problems for fishing vessels. The future lay in plastic products but whenever Castro had bought floats from non-specialist companies there had been issues. The best – the only – way of getting the floats they needed was to make them themselves.

Carlos knew all about working on the sea. His family was from Asturias and his father, Máximo Castro, was a master fishing net worker for cod fishing vessels. He had a profound connection to the sea and to the fishing industry. When Carlos was 10 years old, his family moved to Pasajes in the Basque Country and young Carlos began combining small jobs associated with the sea and his passion for cycling. He even competed in the Asturias road cycling race in 1963. But there came a time when he had to put everything into his work and he had to give up his dream of cycling for a living. From that point onwards, he dedicated his life to the sea and to fishing.

Carlos initially followed in his father’s footsteps and worked alongside him making fishing nets and learning all the tricks of the trade. Together, they perfected the art of trawl fishing and gained a profound understanding of each and every aspect of it, from the nets to the floats, as well as the technical side of sailing. Then came the first fishing boat of his own. And the second. And the third, and so on until he ended up with a small fleet of five vessels. Carlos also worked as a fish wholesaler, dealing every day with 30 tons of produce that needed to get to the exchange at just the right time to get the very best price.

However, when he needed to fit out his own fleet of trawlers with buoys and floats and he purchased the injection-moulding machine, fate would see to it that a new company was born.

Once they had worked out how to handle the machine, they manufactured their first series of floats but found that there was an issue: they only needed 300 units and the machine could produce between 4,000 and 5,000 floats a month.

They decide to go ahead with manufacture regardless. They knew they were on to something special, that they had managed to make floats that were not available on the market and that they were more durable than most. They knew all this because they were benefiting from all the advantages in their very own fleet.

It wasn’t long before the other fishermen in Pasajes wanted floats manufactured by Industrias Plásticas Castro, too. These customers were swiftly followed by fishermen from ports all along the Cantabrian Sea who not only used the trawling technique but other fishing techniques, too. Some of the products leaving the factory did not even have the company’s name or brand on them but that didn’t matter: everybody knew where they were from and everybody knew that the products leaving the Castro warehouses stood for quality. The orders kept coming in. The floats earned the approval of the people who live off and for the sea, initially in Spain and then later in France. This approval later extended across Europe and they even began competing against countries such as Denmark that had long-standing traditions of manufacturing plastic marine floats.

They took the leap from the professional fishing industry to the marine industry. The experience they had gained through the sale of the products that were obtaining excellent results under terribly difficult conditions meant that they soon gained a foothold in this new market. Carlos, his sister, Mari Carmen, and her husband, Enrique Landa, work together. The three of them practically built the company from the ground up. They put thousands of hours, a lot of work and, above all, the trade of two generations who had lived off the sea into it.

Now, in 2018, Castro is not the same as it was 40 years ago. Nowadays, its products are sold right around the world in over 70 countries stretching from Australia to Canada and Morocco. The company has earned a degree of international recognition that was unthinkable in the early days.

Now, in 2018, the company can still be found in the same place where it was founded, in the Molinao neighbourhood right on the border between San Sebastian, a popular tourist spot, and Pasajes, a fishing village. Almost everything has changed since that float was manufactured in the mid-70s. The sea, the fishing industry, legislation and the vessels have all changed since then. With over 400 boats, the Pasajes trawling fleet was one of the largest in Europe and that has also changed: it now has under half a dozen vessels. The change in Castro, however, has been quite the opposite. The company has continued to grow, so much so that is has become a world leader in the manufacture of marine and professional fishing articles and accessories.

Its work ethic and continuous use of the trial and error method for obtaining optimum results in all products (nothing less will do) have contributed towards this growth. They have taken crucial steps foward for the modern trawling industry along the way. For example, the Hydrodinamic floats with dimples that radically decrease vibration on the nets, or the Titanium floats made from a special alloy (Titanium Plastic) that means they can withstand depths of up to 3,000 metres.

Carlos Castro handed over control of the company to his sons, Raúl and Carlos, almost ten years ago. They are the third generation of the family bound to the sea and its techniques. They grew up with the company at their side. First of all, they saw how their father ran it and then they started working there as soon as they were old enough. Both brothers have learnt about the business and worked in it from the bottom up. They started on the factory floor and in the warehouse, then moved up to the offices where they are now in charge of managing the company’s present and future. Both are acutely aware of their father’s formulas and lessons – the same lessons he also inherited from his father who worked with the fishing nets. The essence of the Castro business has barely changed since the very early days and it remains firmly committed to the reliability, precision and durability of its products. It was this commitment and determination that drove Carlos to spend a month setting up a machine in order to manufacture the float he had in mind. 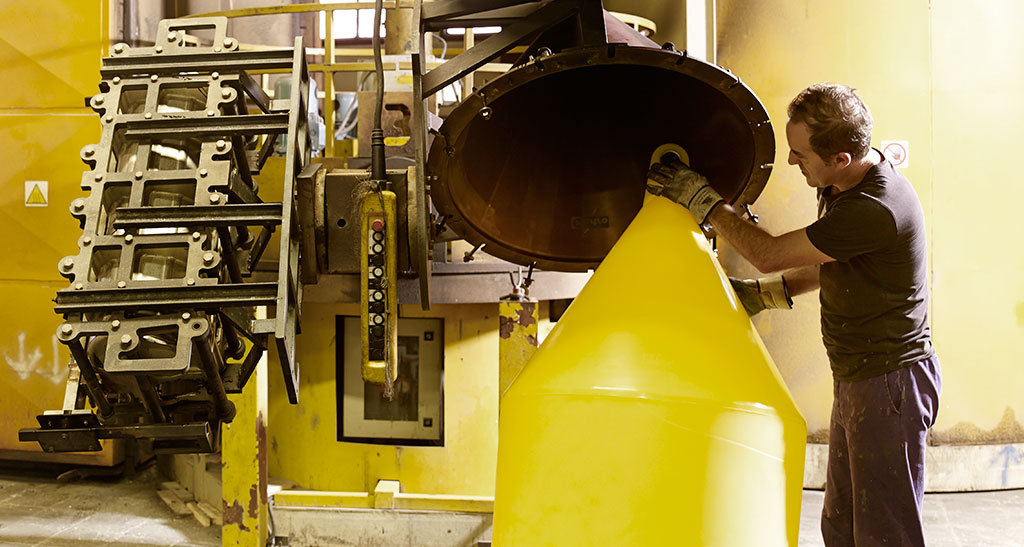 “Castro is now one of the world’s largest manufacturers of buoys, fenders and floats. Its products are exported to over 70 countries and are renowned for their excellence, efficiency and innovative features.”